Green Bay Does It To Themselves

Well, it's over. For me anyway. Football for the year is done. Man, I love Green Bay but if they played every week like they did yesterday, you'd never know they were last year's Super Bowl Champions. Maybe it was that they had a couple of weeks off without playing. But, I don't want to give them an "excuse" for losing. With all due credit to the Giants, they played an incredible game. Green Bay pretty much beat themselves. Of course, technically, the Giants beat Green Bay. But most of you get my drift.

If San Francisco takes it that would be alright. But again, it really doesn't matter to me now. I have to refocus. It's only a game. I know how on edge I got during the World Series and the Rangers went down the way they did. In two games they were one strike away from winning and blew it. I used to laugh at those that got emotionally charged at a game. Then I found myself doing it. Well, now I can relax. Green Bay is out and I really don't mind who wins it now. As the old saying goes, "there are bigger fish to fry."

Sure, sports can be an escape and that's fine. But, when you look at the news, and the state of our nation, there are bigger things to take my attention. Well, it's a Monday. The start of a new week. And...Our God is good!
Posted by Randy Spradlin at 8:11 AM No comments:

Denver goes down, My hope is Green Bay

Well, it was a beating. Not just a game, but a beating. Denver lost to New England by the score of 45 to 10. However, I have to give credit to Tom Brady that he did play an amazing game.
The news read:

"Tom Brady calls signals in Foxborough on Saturday during his record-setting six-TD performance in the Patriots' 45-10 rout of Tim Tebow and the Broncos." So if you're a fan of Denver or not, Brady pulled off a fine performance in last night's game.

We could go on and on about the media shark pool going after Tebow. That's been debated enough and I'll let it go at that. However, my big game is today. Green Bay with home advantage takes on the New York Giants. The Giants really beat the Falcons in a big way with their win over them by 24 to 2. Sure, I'm hoping that Green Bay wins. It would be great to see Green Bay win two years in a row in the Super Bowl. However, I am a realist. They could go down. Even if they do, they had a great season and played well. If they do win the Super Bowl, I will be elated.

What would be interesting if Green Bay pulls off a win against New York they would then play San Francisco. That was an amazing game in itself against New Orleans. It went back and forth towards the end.

Also, if San Francisco does beat Green Bay if the Pack gets to play them, I'll still go for San Fran the rest of the way. I normally want any team that beats Green Bay to lose. But in this case, I defer to change my thinking. Not that any of us has done that! Grin. 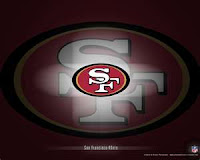 I know it's only a football game. And many don't like sports. That's okay. However, there are a lot of worse things to watch, like reality TV shows! Ugh. Anyway, I hope Rodgers and company can hold their own and take down the Giants as David took down that dreaded Philistine. On tomorrow's blog I will be rejoicing or lamenting. Ha. Have a great weekend.
Posted by Randy Spradlin at 9:02 AM No comments: