Oh Draw Me Lord
And I'll run after you!

It would be easy to say I live on the mountaintop most days. However, if we are truthful, sometimes that just isn't the case. Lately, to my chagrin, I've been fumbling my way through the valley. At these times, I feel very alone.

However, I've learned more in my valleys than I've ever learned in the good times. Sure, I like feeling good, don't all of us want it that way? Rhetorical. Sometimes life just throws us the curves when we are looking for the straight away fast ball.

I have to do an attitude check from time to time. I'm due for one right now I believe. Not easy, but well worth it. Lately a song that David Baroni wrote has touched me deeply. By the way, David is a tremendous writer and singer. I have admired his music since the mid eighties. The song has been popular by Selah. Simply called, "Draw Me Lord." I've found myself humming this tune over and over.

Also my Calvinistic tendencies come through. Verses that say, "we love him for he first loved us" and "you have not chosen me but I have chosen you." This song amplifies the great love of God to me. "Draw me Lord! And...I'll run after you!" It's easy for me to run "from" God when I go through deep waters. However, that's the very time I need to run "to" him. When will I ever learn?

Let the clip of this song touch you. No, it's not Selah's version, but you'll like it just the same. I'm hoping anyway! As always, and they aren't just words, may the peace of Christ be with us all!

Posted by Randy Spradlin at 9:31 PM No comments:

This was some great news! Here's the link. My friends Roger and Andrea homeschool and I know they have to be happy about the headline. I've never believed it was the government's responsibility to have control over all areas of a person's life. Now, if parents "choose" to send their children to public schools, then fine. But I still believe it's a fundamental right for the parents to decide what's best for their kids and not Big Brother. Be well all.
Posted by Randy Spradlin at 11:17 PM 1 comment: 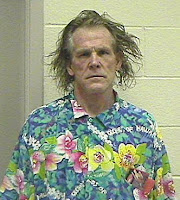 It's hard to believe this is Nick Nolte. At one time he was voted the sexiest man alive by People. Now, I heard two stories about this pic. One, he was wasted and driving hazardly down the road when stopped. The other was that he looked the way he did because of a part he was filming and that was "his" role outfit! Either way, he sure does look different than the great days of when he filmed "Rich Man Poor Man." But, nothing from the world of Hollywood surprises me. Well, I had nothing else to write about at length today...so I thought I'd throw in some levity. As the old movie title goes, "It's A Mad Mad World!"
Posted by Randy Spradlin at 10:56 PM 2 comments: 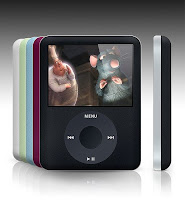 What did I do before it came along? I thought I'd never be interested in one. But, I'm one of the millions now that have one. The Ipod. I was joking with Rosemary the other day about how technology sure has come a long way. She said, "Randy, I remember the day when I thought the transistor radio was the coolest gadget around!" I couldn't help but agree. When I was a boy I remember getting my first portable reel-to-reel player. Now this was even before cassette tapes! I remember Mom took me into the local five-and-dime store to get one. As a note, how many remember what a five-and-dime is? I'm sure a few of you do. I was so excited to get that player that could actually record a person's voice!

Then, cassette tapes came along. It was in those early days when they had the under the dash mounting brackets to house the unit for the car. Boy, is that going back in time! 33 1/3 records were the norm as well. Even before that, remember 8 track tapes? The thing that annoyed me with that format was simple: A song would fade out in the middle of the tune, the 8 track would change to the next track, then the song would fade in and continue. Just when a person was getting into the tune, it faded out! Then when I got my first VCR in 1984 I was psyched. I went with the Beta format. Which to this day I feel was a far better format than VHS. But, marketing has a way of changing the buying habits of consumers.

The venture of CD technology hit in the mid eighties if I remember correctly. I didn't get my first home CD player until 1989. It was a cheapie unit that Bill, a co-worker at the radio station, talked me into purchasing. But, it sounded great to me. Along comes 1998 and I buy my first DVD player. It cost a bundle. Even at the enormous price the first one I had wouldn't even play a dvd-r or dvd-rw.

MP3's came along and with it the hoopla and controversy over Napster. I could go on about mp3s not being as good as standard wave. Which, in essense mp3s are about a tenth in size as a standard wave file, depending on the bit rate you use. But, I'll spare you the drama.

Which, leads me to my final but original point. I didn't think I'd ever want an Ipod. But, I had tried cheapie mp3 players that ran on triple-A batteries, the screens were small and they didn't hold the amount of music the Ipod would. That is, unless you inserted a micro-SD card with extra available memory. Ever since I was a boy I've been enthralled with technological gadgets. And...I wonder...where does it go from here? I noticed that stores are carrying less and less CDs. Online stores offer purchases of mp3 albums for one low cost. New car players will play the mp3 format as well. Also, with the advent of Sirius satellite broadcasting I see landbased radio going out the window. I've had to do some serious thinking about whether returning to radio as a career again is viable. Even though I was in broadcasting, I grew weary of long-winded deejays. I used to get annoyed at a consultant who said that announcers needed to keep their "bits" short. I now understand it. However, if the announcer had something that was good and could keep an audience's attention, then go for it!

Well, I hope to get back to some serious writing. My longtime friend Cindy said that I wrote some good inspirational stuff. That was sometime back when I was! The summer has been busy and I've been sparse in my writing. There's a lot that I want to write about. The upcoming election, the denegration of true Biblical teaching and more topics. Hopefully I'll get to it soon. But for now, time to grab the Ipod and listen to some tunes. Till soon, may the peace of Christ be with you all!
Posted by Randy Spradlin at 4:06 PM 2 comments: 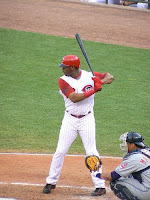 Well my beloved Ken Griffey is now a Chicago White Sox. I have mixed feelings. One, I hated to see him leave Cincy. However, on the other hand, it'll be good for him to go to the White Sox who are league contenders. Plus, I lived near Chicago for ten years and it'll be nice to see him play with the White Sox. With Griffey's longevity with the Reds it's sad that he hasn't seen World Series play. I'm glad he stayed with the Reds long enough to get to the six-hundred home run mark. I've always seen Ken as a stand up guy. I wish him well. However, it just doesn't seem the Reds will be the same without him. Best wishes to him. On a final note I just hope the Reds don't get rid of Adam Dunn. Sure, Dunn's fielding at times is a bit shaky but his bat I think even things out. I was bummed when the Reds got rid of Josh Hamilton. But, that's the way the show goes. Be well all.
Posted by Randy Spradlin at 4:21 AM 2 comments: