The Art Of Letting Go

So, there you are. Cleaning out the garage to make room for the car that actually goes there. You come across an old weed-eater that doesn't work, a rake with a broken handle and a box of old electronic stuff that you had forgotten about. With hesitation and a sigh you think, "Well, I might really need this stuff. I can tape the handle on the rake, maybe I can fix the weed-eater and certainly I'll find use for the old box of electronics." Yeah, even though that box of electronics is over three years old and you didn't know you had it until it appeared again!

I admit, by nature, I am not a packrat. If I don't need it, it goes. A relative of mine yesterday said men like things too simple. I told her that it's not that I like things too simple but I believe in practicality. I will always go for substance over style any day. I'd rather have things that are easy to use, easy to clean and maintain themselves. For example, I hate when I see a decorative tie back over a shower curtain. That's just one more thing to mess with. Isn't it easier to just use a shower curtain? You open it, you close it, finis! But no, we gotta have that extra curtain for decoration that just gets in the way and you have to use the ties to pull it back when you're done. Well, I'm getting on a rabbit trail now.

More importantly is the subject I'm really trying to tackle. In my own life it's easy for me to let go of material things that get in my way. It's not so easy for me to "let go" of old memories, hurts and rejection that have come my way at times. Can you relate? Have you been there? Has something ever been said to you that, even though you have forgiven, it still lingers in the recesses of your mind? I know it does with me from time to time. I have a saying I use. It's called, "keeping short accounts." In other words, I try to take care of things quickly so the enemy doesn't use it as a stronghold later. An unkind word, a verbal jab, a disagreement, etc.

How many people in life are living with emotional scars of things gone by? But, in church you gotta look good, smile and say the proverbial "amen" all the time. Well, frankly, I'm fed up with that premise. We need authentic believers that will help bear the burdens of those around us. I know I've been guilty of not living up to this. The Lord knows my heart as I write, we need authenticity as never before.

Recently a family member and I had a difference over some things. It strained us emotionally for awhile. I was the one who was wrong. It took a lot of courage in the Lord to call him and tell him to forgive me for words that were spoken. I saw him Saturday night over dinner. We are fine!

I know I need to "let go" of things that are in the past. My prayer the other night to the Lord was simple but profound for me. It was me asking God to "let go" of things that no longer mattered. Secondly, I gave him thanks for the life he has given me. At times I've whined like the children of Israel in the desert. As Keith Green would put it, "So you wanna go back to Egypt?" God has blessed me with so many things that I never thought this once shy kid from a small rural town could accomplish. And if I never accomplish anything else, I've had more of a life than many have had. I say that humbly. With no false humility involved, I've often wondered why God would use me? Before I went into Christian radio I would sing a certain song over and over. It went like this: "Jesus use me, please don't refuse me, certainly there's a work that I can do!" That's still my prayer.

Today, if you are hurt over past words from someone, you were abused, or you suffered greatly...let go. Forgive and be forgiven. Sure, if you were a victim of abuse, violence or any other atrocity, you may have to live with the scars. However, I much rather live with the scars knowing I am forgiven, than to live with a grudge in my heart. I speak for myself knowing that the "letting go" process works. After all, we nailed Christ to the cross. How can we, as children of his, hold on to grudges when the King of the universe forgave us when we were in the depths of sin and had no way out? May the peace of Christ be with you all.
Posted by Randy Spradlin at 6:19 AM 1 comment:

I want to mention a great book by Brent Curtis and John Eldredge entitled, "The Sacred Romance." Brent and John say that people love stories. They contend that much of the Bible is written with stories in mind. People love to hear a good story. "The Sacred Romance" is one of those books that literally brought tears. The whole premise is that God wants us to draw nearer to him. In essense, that is the grand scheme of things. God wants us! Why, I'll never know. Page after page tells us that this earth and our lives aren't the way it's supposed to be. We suffer loss, we crave love and things just don't measure up at times. There is a yearning in all of us that something is missing. So, we bury ourselves in activities, work, adventure, books, movies, and ad infinitum. We do so because we "know" something is missing.

That missing part is the great romance of God and us! The part of the book that got to me was one section in particular. Not verbatim, but it talked about the newness we felt when we came to Christ, the day we got married, our first home-run, etc. Where did those times go? Our lives should be a daily "wonder" so to speak. In one chapter of the book, one of the authors said to a neighbor, "How's it going?" He replied, "Oh, same old thing!" It shouldn't be that way. NO, it shouldn't! When I was a boy I had many days playing baseball, climbing trees, and walking by the stream in the woods that was next to our home. I was full of life and wonder. When I received God's invitation to come to him, I did! I was full of rapture and gladness.

Now, I'm a bit older. Some of the flicker, it seems, has gone out. I want that passion renewed. So, with reading this book, I'm starting a trek. A trek that will lead me deeper in the arms of God. God said we'd find him if we'd search for him with our whole hearts. If my love for anything else is greater than my love for him, I have truly missed the whole secret of life. I know I've mentioned this many times. But lately, that chorus by David Baroni keeps repeating itself, "Draw Me Lord and I'll run after you!" It's taken from the Song Of Solomon chapter 1 verse 4 I believe. It mentioned the daughters of Jeruselem. It irks me when pastors just slap that whole book into a doctrinal stance that it is just "the bride of Christ." True, to some degree it is. But, it's also a love story. In fact I adore love stories.

Do yourself a favor and read this book. Other than, "An Arrow Pointing To Heaven", a book on the life of Rich Mullins, has a book touched me so deeply. You see, I knew Rich at least well enough to know the wonder he saw in this world and his total abandonment to the call of Christ. He was a lover of God! Plus, we know that God so loved him! May we all fall deeper in our love for Jesus. Over the weekend I prayed while walking through a parking lot. I told the Lord that at times my feelings run hot and cold, but he never changes in his love for me. If we truly are the bride of Christ, let's live like it! God is the bride groom and he wants a spotless bride. Unfortunately, at times, I have played the harlot in the theater of life with him. How I recant in my wandering from the one who loves me so that he would add in Solomon's book, "Draw me away and we will run after you!" All I know is this, God loved us so and always will, let's be drawn into that sacred romance with our groom, the Lord Jesus Christ. And...may his peace be with you all.
Posted by Randy Spradlin at 12:42 AM No comments: 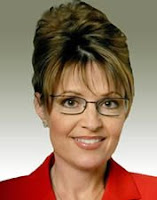 Governor Sarah Palin will take the stage tonight. I hope she does well. I'm sure there are many who are interested in what she has to say. I don't speak too much on politics but I just had to on this one. I think McCain was on target for picking her for the VP spot. Tonight's convention should be an interesting one.
Posted by Randy Spradlin at 3:26 PM 2 comments: